First, on this “Another First” post, I’d like to apologize for the drunk ramblings last time we met. I need to invent a breathalyzer to disable text messages, Facebook, Twitter and now my blog when over the designated limit. For me, that limit would be lame ass. Seriously, I’m amazed that I’m 35 years old some times.

And just to clear the air, I did not ask the boy. I did text the friend who has said all of three words to me since….apparently she thinks I’m an idiot. I’ll keep you informed as to any movement on the boy situation. Don’t hold your breath, I don’t need that on my conscience.

Anyway – on my list of 13 13’s in 2013, #13 was to try 13 new things. This weekend I went to the Oakland A’s game. This was my first sporting event in California and my first ever Major League Baseball game! And it was fabulous! I spent $9 on a beer! I had a pretzel with cheese (YUM!). I had cotton candy. I saw a CarBQ. The game was stopped because of a fight in the stands and some dude almost came over the railing onto the field. 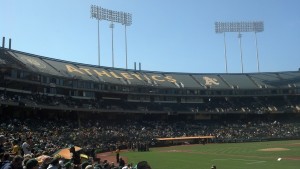 Oh the adventures I’m having…

1 thought on “Another First”